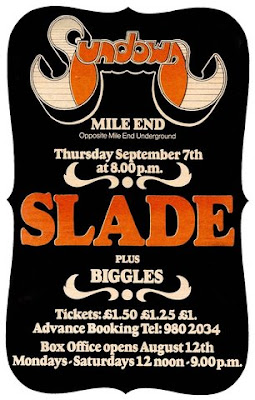 
"The day after our opening date with Humble Pie in San Diego, we had to fly back to Britain. We were contracted to open a new venue in London. It was a big theatre in Mile End Road called The Sundown. We had been booked to do it for ages and it was just unfortunate that it coincided with the start of the tour. There was no way we could get out of it. Twenty-four hours after we'd arrived home, we had to get back on a plane for the States. It was the biggest distance we'd ever travelled between gigs. In the old days, we used to joke that our agents always booked our shows miles apart. They would give us one in Edinburgh, followed by one in Portsmouth. They never seemed to care how far apart they were. But compared to going to San Diego, then London, then back to LA, it had been nothing. We were clearly working on a whole new scale."
Noddy Holder: Who's Crazee Now?

Just before Slade's opening of the Sundown Mile End, production controller Ian Knight said that he thought the new rock centres could be the most important thing to have happened in the music business for many years. Few people know the scene as well as he does. After producing Sunday concerts at the Roundhouse for three years and being involved in forty festivals in Europe - he's also on the Government's advisory committee on pop festivals - he knows what it's all about. But even Ian Knight didn't anticipate the success which followed. 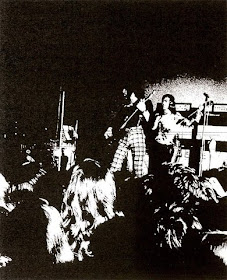 This was one of the costliest performances ever seen in any UK rock venue. Slade had broken off their USA tour to fly back for the opening concert. They've never been better.

"We wanted to play for London and for this new venue." said lead guitarist Dave Hill.

The venue opens a new era for the whole pop/rock scene and Slade's stupendous show matched the occasion.

Before one of the wildest audiences they'e ever scene, they slammed into 'Hear Me Calling' and their 2,500 followers went wild. With 'Move Over Baby' it reached fever point. Girls screamed ecstatically and fought to get on the stage.

The encore of their current hit 'Mama Weer All Crazee Now' whipped up the frenzy and teenagers struggled with security men to get back-stage. It was a revival of 'Beatlemania' atmosphere that this hall and band had generated. 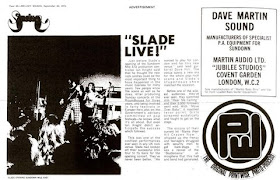 
This review was taken from an article in Melody Maker at the end of September 1972. In January 2010, Jerry Gilbert talked to John Conlan about The Sundown Experiment, the live venue chain that rocked London in the early ’70s. John Conlan opened four Sundown theatres in the London suburbs for the Rank Organisation.

Growing up in Ireland, Conlan was planning to set out across the Irish Sea by the early ’60s. He'd already been involved in the music industry in Ireland.

"My father had contacts in the Rank Organisation and they brought me over to the UK in 1964 as a management trainee."

At that time Rank owned 50 or 60 so-called ‘super cinemas’ which generally doubled as venues for the 1960s Rank touring pop shows. He was already familiar with these venues by the time the Sundown plan was being hatched.

"Rank provided the cinemas and the bands used the house system. I used to get sent to liase with the promoter and backstage crew."

Simultaneously, the Rank Organisation started opening Top Rank Suites, which would sustain it through the 15 years and Conlan became operations manager. As the hierarchy at Rank started to take notice, Conlan persuaded Rank MD Bryan Quilter to accompany him on a trip to Brighton to see a sell-out show with Rod Stewart & the Faces. Says Conlan:

"...Bryan was always forward thinking, very progressive. We hired out the venue to promoters and he fell in love with the concept."

"I told him we could do this ourselves. I said why don't we get involved and do what they had done at Fillmore"

Quilter was prepared to back the idea for the new Sundown concept, Rank ended up not only converting that old Regal Cinema in Silver Street, N.18, but also The Odeon, Mile End, Astoria in Brixton (now the O2 Academy) and Astoria Ballroom in Charing Cross Road. They allocated around £100K per unit to convert its old cinemas to live music venues, with the idea of running top line concerts on Friday and Saturday night, and a smaller band night on Thursdays.

"It's hard to make a large capacity venue work one or two days a week so we continued to run cinema midweek, using the Circle seating," says Conlan. "Downstairs we took the seating out and when we wanted to operate it as a discotheque we would put dancefloors in."

Technically, the Sundown was modelled on the Roundhouse but they were not created without a fight, recalls Conlan.

"Rank owned lighting company Rank Strand and wanted me to use their fixtures; they also had a favoured hifi company... I almost got fired."

"...they brought this hifi-cum-discotheque type system... which was hopelessly under powered." 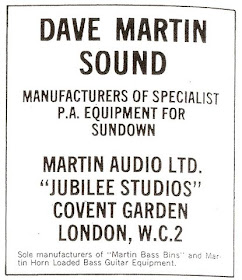 By now, Conlan had hired production director, Ian Knight, who had introduced him to Australian sound system genius, Dave Martin. For the Sundown demo, Martin lashed together a beefed-up version of the sound system he had provided for the Roundhouse.

“We rigged up what we could," says Conlan. "The Rank guys made their presentation... and then we lifted the safety curtain and revealed ours... the Dave Martin sound just hit you in the guts. I think we also had some of Joe's Lights working. These Rank guys just stood in the middle of Brixton and said 'Holy f***'.

“We opened all four sites within a four-week period in 1972," Conlan recalls. "We made the decision that we would promote ourselves, and I went to see Neil Warnock at NEMS, who became the agency. I said we wanted to open in three months time and he nearly fainted. We tried to fill the date sheet which was not easy because bands had loyalties with certain promoters such as John & Tony Smith or Barry Dickens."

The Sundowns were set to open immediately after the summer recess and launched into the burgeoning autumn ’72 period. 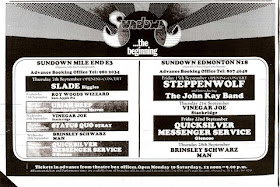 Brixton, for one, was looking for a big band to play the opening night in September, and the promoters secured Deep Purple, who were on their big UK Machine Head tour. It was the closing show of the tour and their only London concert, promoted by Pete Bowyer of NEMS.

Britain’s hottest chart act in 1972, with three No.1 singles already to their name, Slade’s feverish opener at Sundown Mile End had been the first, on September 7, while Edmonton debuted with Steppenwolf on September 15 and Stephen Stills’ Manassas was also one of the first bands into Brixton.

Memories of Mile End — and how Slade nearly pulled out of that opener — brings a rueful smile to Conlan’s face.

"Mile End was a venue we should never have opened, it was in the wrong location."

"We booked Slade and in the meantime they had broken in America and we were told 'they are not coming back'. But we got them to come back to the UK for one night only or we would have had no opening night." 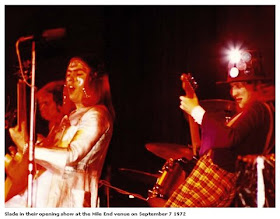 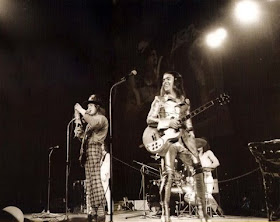 Edmonton was the most successful venue, with the greatest longevity.

"It had an enormous capacity of 3,500 and had an incredible stage. It was always the best venue, and where many of the bands, like Elton John, wanted to play. However, Neil Warnock found Brixton a difficult place to programme."

The anomaly was Charing Cross.

"This was intended to be a larger version of the Speakeasy (the late night gathering point for the music industry, based in Margaret Street). We opened with The Crickets and it was quite a successful live venue before drifting into mainstream discotheque."

But just as the Rainbow’s business plan had foundered when it was unable to book two shows per night to meet its business plan, so Rank Organisation’s downfall — incredibly — came on the cinema side, which had always been its core business.

"The movie side was just so difficult. Even with Rank's clout we couldn't secure first run films [because it was no longer a full-time exhibitor]."

More successful were the small band nights — often funded by record companies — and the willingness to back rising stars like Genesis and Crazy Horse.

As for the larger events, the Sundowns still faced heavy competition and promoters such as Barry Dickens at MAM wouldn’t use the venues because the Rank Organisation were seen as competition.

"We were marginally profitable but eventually the board asked 'Is it going anywhere?' and we said 'No', so it was phased out and I went on to other things."

Why had it failed so spectacularly, a lifespan of only four or five months, after hosting some of the most memorable concerts in the annals of rock lore?

"We simply opened too many and part of the plan was flawed."

In their way, the brief lives of these iconic venues each had been responsible for hosting some of the most memorable gigs of all-time (an accolade they certainly shared with The Rainbow).

John Conlan carried the legacy of Martin Audio forward, and continued to use its systems in Top Rank Suites through the remainder of the decade. These were live band systems for the kind of showbands that toured the Top Rank Suites and Bailey’s cabaret circuit — spiritually a world away from the Sundowns.

And so for a few glorious months from late 1972, the Rank Organisation managed to carve its name into rock history with the Sundown experiment, leaving an indelible mark and a host of wonderful memories.

The Sundown Experiment information is taken from Total Production International where you will find an interesting read with much more detail. Photos by Barry Plummer.

Please get in touch.

You can also find me on Facebook or several Slade forums.