Cream Of The Pop World

THE CREAM OF
THE POP WORLD
By John Ogden


Forget records like Wrapping Paper and I Feel Free. The Cream, in person, are a much superior set of artists than would appear from those records,


Their first appearance at Wolverhampton's Civic Hall last night was also the first time I'd seen them in person - as The Cream that is.

I was suitably astounded, I'd seen them all before in different groups and until last night had always regretted their move away from the blues.

Now I don't mind. Their music has an urgency and excitement about it which few, if any, other groups can convey.


And there's no doubting the technical ability of all three. I saw members of several groups in the audience and they all looked enthralled, staggered and astounded.


And this isn't the most extreme reaction. A crowd of fans at the front of the stage were bowing down in salaaming motion towards the end, and especially during Ginger Baker's fantastic drum solo.


Certainly they were brilliant. The group sound as a whole is huge; Eric Clapton’s solos were beautifully executed. Jack Bruce played great bass, staggering harmonica, and sang in fine style, despite a bad cold and sore throat.

Ginger Baker committed the usual assault and battery on his drum kit and yet managed to be technically perfect.


Their spot alone was worth paying the entrance fee for and I’d like to know how many groups had refused bookings so they could be in the audience.


Those groups supporting were The ‘N Betweens, The Parchment People, The Peasant Sect, and British Standard. 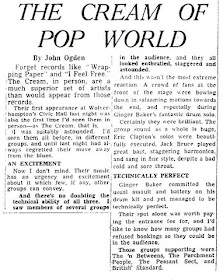 From the Express & Star: Saturday June 10th. 1967. It's a shame he didn't mention the 'N Betweens performance but they did get equal billing on the Friday ad.

My utmost appreciation to Chris 'The Historian' Selby for another forgotten gem found in the archives at Wolverhampton.