A Night At The Palladium 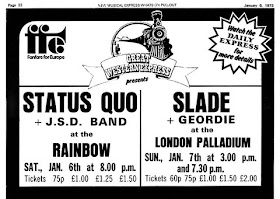 1973 opened with a special one-off concert at the London Palladium. A massed gathering of the faithful that left the old theatre quivering on its foundations.
The celebration was part of an eleven-day 'Fanfare For Europe' planned by the Tory government of Prime Minister Edward Heath, at a cost of $825,000. Among its flourishes was a performance by the Berlin Philharmonic at the Royal Albert Hall, a 'Poets of Europe' reading at Lincoln's Inn, and a soccer match between all-star teams from the old Common Market Six, and the three new members: Britain, Ireland and Denmark. 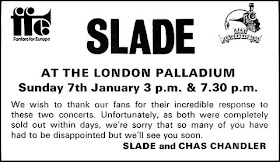 
AT THE LONDON PALLADIUM


Sunday 7th January 3p.m. & 7:30 p.m.
We wish to thank our fans for their incredible response to these two concerts. Unfortunately, as both were completely sold out within days, we're sorry that so many of you had to be disappointed but we'll see you soon.

The 'one-off' gig consisted of two performances by Slade and, support group, Geordie, one in the afternoon and another in the evening.

"It was part of various events to celebrate Britain's entry into the Common Market."
Chas Chandler: Feel The Noize

"The first gig I ever went to was Slade at the London Palladium. I'd never experienced something so loud or seen girls that looked so glamorous and lads so excited....there were girls wearing hot pants, girls didn't wear hot pants in school, they wore school uniform. I thought 'Wow! What's going on here?'...."

"Course, the London Palladium was everything, Tommy Trinder and all the famous people had been there, the revolving stage and everything. But not this night?"
Dave Hill: It's Slade!

"I said 'Your gonna have to clear all this stuff out of the pit coz it's gonna be pandemonium when we come on stage.' and the guy says 'Nah, we've had them all, Frank Sinatra, Sammy Davis, Judy Garland, we've had them all here.' You've never had a Rock Show here."
Noddy Holder: It's Slade! 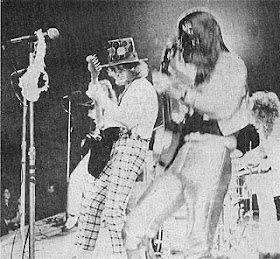 They came on looking exactly the same as they did on Top Of The Pops, literally twenty yards in front of me!....I can remember it as clear as day and it just blew my head away."
Dylan White: Slade Fan

"They had to call the fire brigade in.... the balcony was shaking...."
Don Powell: It's Slade!

"When Slade were playing the balcony was moving up and down like a see-saw....the kids were all stamping their feet in time and it had the same effect as soldiers marching over a bridge."
Chas Chandler: Feel The Noize

"The kids came over into the orchestra pit... drums were going up in the air, sheet music was flying around, it was total chaos."
Noddy Holder: It's Slade!

"They wouldn't let me Dad in coz he was getting on a bit and they said: You can't come in here, they're going mad."
Dave Hill: It's Slade! 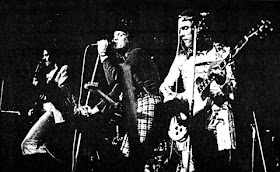 SLADE'S AUDIENCES come reach to rock, and boy they sure do that. In the unusual surroundings of the London Palladium last Sunday the band's camp follower's packed the Palladium twice in a day for the band's special Fanfare For Europe concerts backed by Newcastle's Geordie.

The atmosphere, like the audience, is always something special when Slade are in town. Dressed in silver toppers, knitted hats, football scarf’s and waving banners, they age from pre-teens to middle fifties in fact. a football crowd without, thankfully, the knuckle.

Four piece Geordie, we were told had been specially requested by Slade to appear on the bill and no wonder, they gave the audience a good time and aimed for that special spot right between the eyes, They stomped about and joked and generally warmed up the Palladium’s customers for the big ‘un.

It only needed the slow lifting of  the fire curtain and slight rustle of bodies behind the stage curtains and the whole audience roared into expectant chanting "Slade", "Slade", “Slade".

In a flash and on they rushed, Noddy Holder looking more and more like one of the Diddy men than ever, All dressed as sparklingly immaculate as ever, they churned into some blistering stuff: ""Hear Me Calling", "Gudbye T’ Jane". "I Won't Let It 'Appen Again", Joplin’s "Move Over" with Jimmy Lea’s thick bass and drummer Don Powell taking the wheel.

Then came the "slow sexy one. "Darlin' Be Home Soon" This heralded a more extended chat with the audience from Nod who went through the now familiar football routine and got the frantic fans singing "You'll Never Walk Alone", a thick wall of weaving bodies with raised arms in salute of their heroes, very accessible heroes at that too.

Back to the thundering rockers: "Take Me Bak 'Ome ", "Get Down And Get With It", enough time for Noddy to introduce Stanley Baker" in the Royal Box, asked if everyone was "alright?" and still control their incredibly precise act. That might sound strange when considering Slade's spontaneity but make no mistake they're in complete control of things.

They flitted back for their encore" "Mama Weer All Crazee Now" and then, as the fire curtain trundled down again, the stage was left without life - just the usual Slade flotsam mingled with the amps, silver covered jump boxes and a drum kit: hosts of silver toppers, a collection of small glitter projectiles and the enevitable bevvy of knickers and bras.

Boy. I'm getting a bit tired of Slade gigs. Not the music. not the atmosphere of the whole affair or the boys' act - merely the fact that after standing for an hour clapping, singing and stomping along with the fest of the crowd and leaving with a hoarse throat. I know I'm going to have to face it again and ~again - oh, what a way to go. - BILLY WALKER.

The Fan Club newsletter was very late in covering this since they covered two months at a time and, so as to get in before Xmas, they had a Dec/Jan newsletter. This went out before the 'Fanfare For Europe'  announcement and so it wasn't mentioned until Feb/March newsletter. 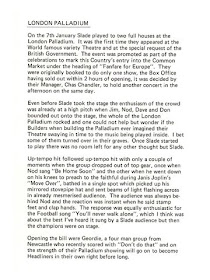 On the 7th January Slade played to two full houses at the London Palladium. It was the first time they appeared at the World famous variety Theatre and at the special request of the British Government. The event was promoted as part of the celebrations to mark this Country's entry into the Common Market under the heading of "Fanfare for Europe". They were originally booked to do only one show, the Box Office having sold out within 2 hours of opening, it was decided by their Manager, Chas Chandler, to hold another concert in the afternoon on the same day.

Even before Slade took the stage the enthusiasm of the crowd was already at a high pitch when Jim, Nod, Dave and Don bounded out onto the stage, the whole of the London Palladium rocked and one could not help but wonder if the builders when building the Palladium ever imagined their Theatre swaying in time to the music being played inside. I bet some of them turned over in their graves. Once Slade started to play there was no room left for any other thought but Slade.

Up"tempo hit followed up"tempo hit with only a couple of moments when the group dropped out of top gear, once when Nod sang "Be Home Soon" and the other when he went down on his knees to preach to the faithful during Janis Joplin's "Move Over", bathed in a single spot which picked up his mirrored stovepipe hat and sent beams of light flashing across in already mesmerised audience. The audience was always beehind Nod and the reaction was instant when he said stamp

feet and clap hands. The response was equally enthusiastic for the Football song "You'll never walk alone", which I think was about the best I've heard it sung by a Slade audience but then the champions were on stage.

Opening the bill were Geordie, a four man group from Newcastle who recently scored with "Don't do that" and on the strength of their Palladium showing will go on to become Headliners in their own right before long.

Walter Gibbons built the Palladium in 1910 to compete with the Hippodrome and the Coliseum. It was a circus venue and an ice Skating rink before being redesigned by Frank Matcham, a famous theatrical architect. The Palladium had its own telephone system so the occupants of boxes could call one another and a revolving stage. The theatre retains many of its original features and became an English Heritage Grade II listed building in September 1960. After Slade's performance the balcony was found to be cracked and much of the seating destroyed.

"After the show half the seats downstairs had been wrenched from their sockets. They didn't invite us back."
Chas Chandler: Feel The Noize

".....we were banned from that chain of theatres. From then on, we were never allowed to play there again but we warned them!"
Noddy Holder: It's Slade! 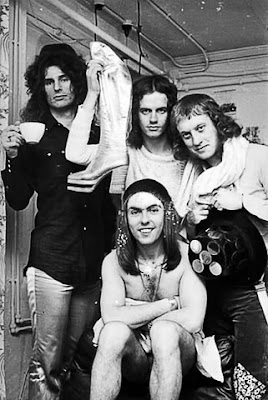 My thanks, as always, to Chris Selby for hours of research, Dave Graham for his assistance and also, thanks to Dave Kemp for inspiration and motivation. 'It's Slade' is a 1999 BBC Manchester production which can be viewed here.