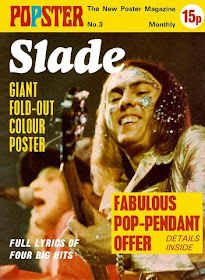 First off, let me tell you how great it's been to get your letters telling us what you think about Popster. And. I'm pleased to say, you all think it's great!

And that's great news for us, too, because Popster is a completely new idea in pop magazines. There's never been anything like us before, so it's fabulous that you all dig the idea.

This issue is the first in which we look closely at a British band, and who better than the fantastically exciting Slade?

Many' of you will have seen them during the recent smash tour of the country. And in this issue of Popster we've brought you the best action pictures our photographers could get from that crazee tour.

So everything you ever wanted to know about Noddy and the lads of Slade is right here in Popster ... plus the lyrics of four Slade hit songs ... plus a fantastic pin-up picture for your pad wall.

And why don't you have a look at our pop pendant offer. There's a Slade pendant and a Michael Jackson pendant - for Popster readers only!

So it's all happening in Popster once again this month. Keep those letters coming and keep the beat going until next month!

SOME singers, some bands, can work through a whole lifetime of heartache without getting the lucky break that leads to success. Others are seen and heard by top show-biz brass but turned down as being "not good enough" and, disappointed, go back to the factory floor or behind the counter of the local supermarket.

But some talent-spotters have an inborn, instinctive, intuitive way of knowing instantly what will sell to the general public. Such a man is the sky scraping Chas Chandler, one-time bassist with the Newcastle based Animals-remember "House Of The Rising Sun"?

Chas "happened" to be in a sleazy club in Greenwich Village, New York, when Jimi Hendrix (then completely unknown) was playing a set. Chas knew he'd unearthed a world-class star, brought the "wild man of rhythm and blues" to London.... slowly, patiently, made him into a star.

And the same Mr. Chandler "happened" to be in the Rasputin Club in London when a band named Slade were rehearsing. He stopped dead in his tracks, got that old "star" feeling again, and slowly, patiently made them into a star group.

His feelings at that precise moment of a first hearing? "Better musicians than the old Animals had been", he says. "Fantastic energy, in the way they worked and played. Good rough edge to them ... nothing prissy. They were playing because they wanted to, not because it was going to lead to a job of work and a pay packet".

So ... Noddy, Jim, Dave and Don ... after a false-start gimmick of becoming the first skin-head group... well, the rest is history. A history that stems through "Get Down And Get With It", "Coz I Luv You", "Look What You Dun", "Take Me Bak 'Ome'" "Mama Weer All Crazee Now", "Gudbuy To Jane". , , through countless sell-out live shows, through a tour of America which grasped the whole pop scene there by the scruff of the neck and shook it until it rocked and rattled.

Forget it. There was this skin-head craze, with the cropped hair-cuts and the braces and bovver boots, and by joining it (in appearance, at least!), Slade got publicity for a while, but it didn't work.

Because they looked pretty tough, managements of concert halls and ballrooms were wary of them; considered the foursome must be troublemaker’s. So, putting it simply, they grew their hair again ... and rocked on.

Slade are noisy, rumbustious, and they each have a love of life. They enjoy their booze, birds and brass. But they don't go chucking their money around,

They used to stay in hotels costing about £1.20 a night. Then they hit number one spot in the charts. They said to Chas:


"Now we're sort of stars, like ... we'd better stay in better-class places. Could you book us into hotels that cost about £1.50 a night, breakfast included, of course'"

A Slade live show is an unforgettable experience. Noddy, as front man and singer, exercises total control over the fans, He says "wave your arms" ... and arms are waved. "Fingers in the air".... and fingers prod the air.

The fans chant back; join in.

Says Noddy: "Our fans have energy to spare and we're proud that they spend some of it listening to our records and coming to our shows.


"Pop music was killing itself because it had become boring. Those so-called progressive musicians up there on stage, playing forty-minute solos, then another ten minutes tuning up their instruments. And the fans were expected to sit there like a bunch of church mice, saying now’t and listening with deadpan faces.

"We say to the fans: join in, because you're as important a part of the show as we are. Stomp around. Let's make it a big party, but let's play it by ear".

So the fruity, extrovert Noddy is as likely as not to tell a joke,. or reveal the truth about the colour of a fan's knickers to the assembled multitude!

And Noddy underlines the point:


"What fans want is to let off a bit of steam, meet a few birds, have a few drinks. That's what it's all about. They want to stomp, so we give them the right kind of music. Rock on, that's us.

"And if some of the other groups think we're not up to much as musicians... well, stuff 'em! It took us a long time to learn our business of working to an audience. We're no overnight wonders, believe me".

It did take time. After individual Slade men had tinkered around with various groups in the Midlands, there came a band called In Between. Don was the original drummer, then Dave joined.

They had a singer who was "fat and lazy", so they auditioned Noddy ... and he got the job. Their search for a bassist ended when Jim ambled in for an audition.'

They started making singles, as Ambrose Slade, in 1968. Nothing much happened, despite allegedly being "discovered" several times. They went to the Bahamas to gain experience. They were conned out of money in the States.


"We never, at any time, thought of packing it all in. We had this built-in feeling that the bad times would one day turn to the good times ... besides we were all good mates, so what was the point of splitting and doing something else. We'd have been bored stiff".

Even now, so many hits further forward in their lives, Slade keep working to improve the visual and sound impact of their act. Like Jim leaping around on the speaker cabinets; or special rostrums so that Dave and Noddy can sort of work from the rocking heavens!

Somebody wrote that Slade are the heroes of the working-class society of pop. Fair enough. It's obvious that the boys enjoy their football, booze and birds ... and there's old Noddy, rolling his eyes, rubbing his hands together, looking like some weirdo out of a Charles Dickens' book.


"First time I ever saw a band live, I knew I wanted to get up there with them. It was the glamour first, then the music. I admit that. Often, though, it's like that with the fans. Mind you, there's all the travelling and the lousy grub and all that but the glamour still comes through to me".

Chas Chandler's influence is there in everything Slade do, they genuinely do regard him as being the fifth member of the group. For instance, he positively forced the boys to do more song writing. Now they enjoy composing songs and they say it's all because Chas had faith in them,

He guided them into changing the face of pop music ... to putting back the scenes of fans bopping in the aisles, raising the roof when they felt like it, and answering back whenever the lusty-gusty Noddy demanded a "reply",

No worries that parents, as a general rule, don't seem much impressed by Slade. The mums and dads didn't much like the Stones and Slade are every bit as controversial and loud and silly on stage.

And Slade pull in as many male fans as chicks. Noddy is the hero of the lads; Dave of the girls; Jim provides the musical application; and Don is there at the back, powerhouse department of the band, quiet but obviously involved.

Says Noddy; "It's all down to our live shows. That single 'Get Down And Get With It' broke because it was like the stuff we do on stage, not just a studio sound.


"The visual thing all rubs off.... like people wear Slade' hats, or Slade boots, and so on, Not the Slade language, though people all over the world used Slade language ages ago!"

Given the knack of communicating, of being able to make people have a good laugh and a boisterous good time, plus the knack of making, writing and producing good records ... well, that's what Slade are all about now and if the future takes them into movies, or a TV series, be sure they'll know how to cope.

Chas Chandler, meanwhile, reflects his obvious pride in the group.


"I've seen 'em hundreds of times", he says. "And they still knock me out. , , just like they did that very first time I heard them rehearsing".


Even after Slade had had a couple of number one hits, Noddy Holder refused to change his holiday plans. His idea of a holiday heaven is to pack a rucksack and hitchhike through Ireland. Many a friendly lift-giver has, to this day, no idea he had helped along an international pop star, because Noddy never let on who he was.

SLADE once stopped at a Northern boarding house and asked the landlady if she could put them up for the night. "Okay If you share?" she asked. They’d shared one room before, so said it would be perfectly okay. "First left, top of the stairs", said the landlady. And in that room they were expected to share, they found four Irish labourers snoring loudly. That was who they had to share with.

DON POWELL, quiet man of the group, nurses an ambition to own a farm one day ... but not until he has the time to look after it properly for himself. Unchanged by fame is Don. Like all the boys, who still enjoy nothing more than a singsong in a local Wolverhampton boozer, singing along with resident pianist Reg? They don’t even try to take over the show ... just join in.

SINCE "Get Down And Get With It", Slade have found a way to get their stage sound accurately on record. Basically, they go into the studio and put the vocals and the backing tracks down at the same time. It's hard work to get that hand-clapping foot-stomping sound · .. but Slade get perfect results much faster than most other bands.