Written by Noddy Holder and Jim Lea and produced by Chas Chandler. It was the band's second hit single in the UK and the first of six number one singles. It was released on 30/10/1971 and was last seen on the charts on 05/02/1972 at #44. According to Noddy Holder's autobiography the single sold half a million copies in only two weeks.


It is common knowledge amongst Slade fans that Coz I Luv You started off life as an instrumental violin spot for Jim and was only given lyrics due to Chas's advice for the band to write their own material.  What isn't common knowledge, however, is that the tune is basically a reworking of a 1970 song, called "Nine By Nine" by John Dummer's Famous Music Band!


Typical of Slade's brash, stomping glam style, it prominently featured Jim Lea's electric violin and quickly reached number one on the UK singles chart, where it stayed for four weeks in November 1971. Originally, the first week of being released, the single hit #26, followed by #8 the next week and #1 the following after. The single was #1 for 4 weeks and stayed at #3 for 3 weeks after.

Chas Chandler had put Lea under pressure to write a new track for a single. Lea turned up at Holder's home unexpectedly with his guitar and violin with an idea for a song with a Django Reinhardt & Stephan Grapelli hot club sound. The track was written in half an hour. This began the writing partnership of Holder and Lea which would carry on throughout Slade's career. Originally the band felt the song to be too soft and so clapping was added to the recording. The misspelt titles also became a trademark for Slade, causing a great furore among teachers up and down the country.


"Is this the MM staff band? I think I recognise it now the guitarist is speeding up. The song isn't bad. I like the violin. It's very course, but the guitar needs speeding up a lot. It can't be East of Eden, and it's certainly not Family. Slade, yes? They are a good group because the don't care about the notes and there is a public wanting that. Another group might be too inhibited to do what they do."

In Sounds magazine interview, 15th Novenber 1980
Back From The Dead - Steve Keaton meets Noddy Holder and Jim Lea of Slade.


"I didn't even like some of those old ones. We all hated 'Gudbye T' Jane' when we made it, it was knocked up in half an hour at the end of one of our studio sessions. The same for our second single, 'Coz I Luv You'. It was namby-pamby to us, a throwaway for an album. It shot to number one in two weeks and we thought, 'What a pile of shit!' It was so wet."

"Written by Slade men Holder and Lea, this is a natural born successor to "Get Down and Get With It". As they've been riot-raising round the British Isles of late, I've no doubt that this staccato building production will make it. And make it big. Touches of violin, yet, a sturdy foot-pounding sort of build up. Less frantic than of yore, but a really persistent ear-bender."

(Both sides of the sleeve are the same). 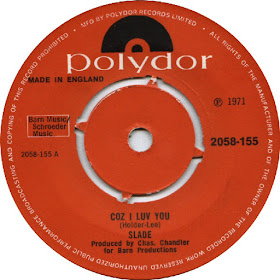 (Note the incorrect spelling of "Lea" on the label!) 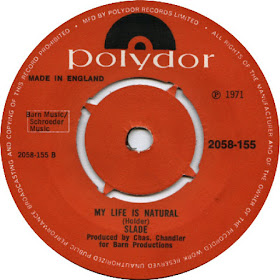 New Musical Express reviewed the single upon release and defined it as a double a-side single.

"A good follow-up to the recent hit by Slade, and one which could give the outfit its second successive chart entry. The only drawback is that this is a double a-side disc, and I feel that artists are foolish to try and grab the best of both worlds. In the process, sales are often split down the middle, with the result that neither side is a hit! In this case, I would have thought that "Coz I Luv You" is the obvious plug side because it should satisfy both the mainstream pop and the heavy brigade. It's a rousing hard-hitting number, generating bags of electricity and urgency, but nevertheless blessed with a strong melody line and a chorus with which it's easy to join in. The flip is more progressive and is something of a rave-up with, I imagine, more limited appeal. All the same, a meaty set from Slade and a tight production." 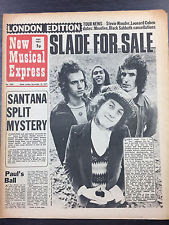 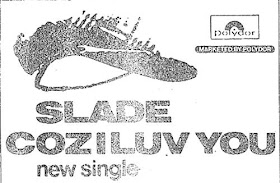 "SLADE'S single "Cos I Luv You" captures the No.1 spot in the NME Chart this week _ at the same time as their contract with their present recording company, Polydor, is due to expire. And as a result of these coincidental developments, the group and manager Cha!s Chandler are being deluged with offers from practically every major disc firm in the business!
So far no decision has been taken as to whether Slade will switch to another label or remain with Polydor.
After turning down an offer of a major launching in America (reported last week), Slade plans to work extensively in Europe during the coming months - its current British chart-topper has already entered the Top Twenty in several European Countries.
But as far as Britain is concerned, Slade intends to carry on with its normal rota of college and ballroom gigs. Despite its No. 1 triumph, no form of concert tour is envisaged for the outfit. A spokesman told the NME: "The boys don't want to play concerts - it's not their scene. What's more, they have no intention of putting up their price to promoters. They will continue charging their usual pre-Chart fee."
Slade was flying to Paris today (;Friday) to tape a TV show. Latest British one-nighters are Bexley Black Prince (this Sunday) and Sunderland Locarno (next Wednesday)." 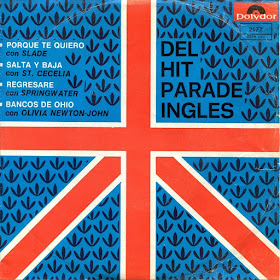 Mexico "Coz I Luv You" (various artists Promo. with fold-over flap back cover) 1972. 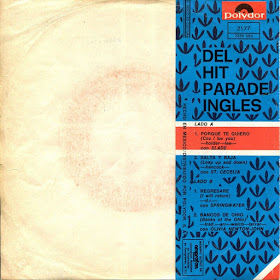 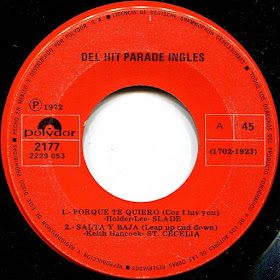 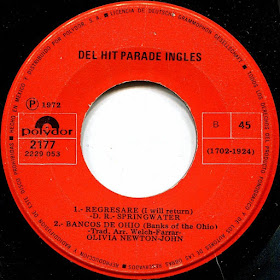 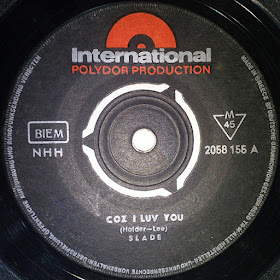 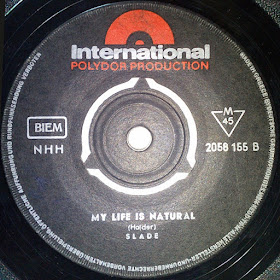 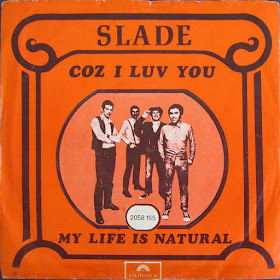 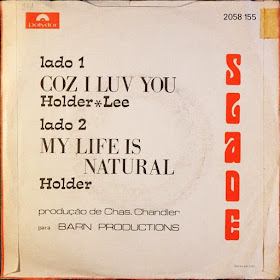 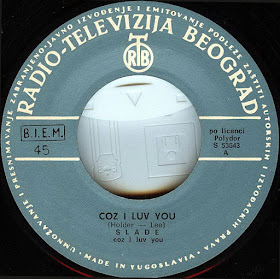 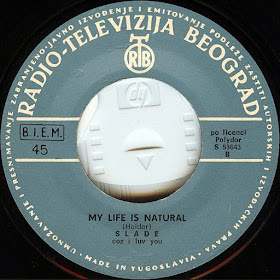 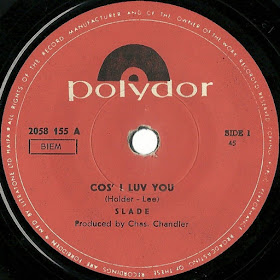 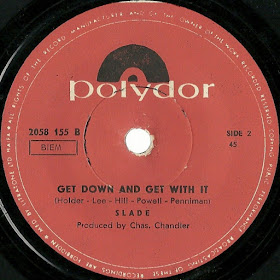 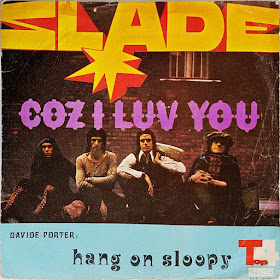 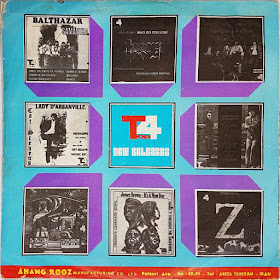 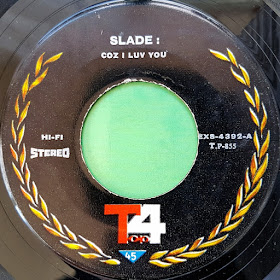 - (Shared Single, with "Hang On Sloopy" by Davide Porter!) 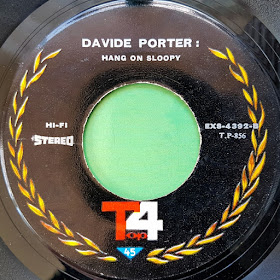 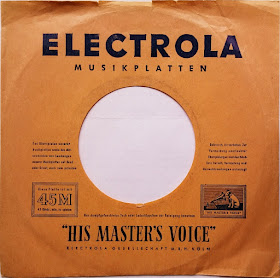 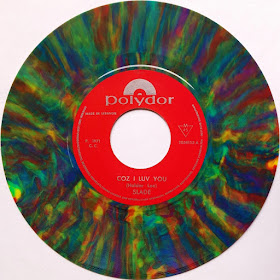 In 1994, Jimmy Lea produced several reggae cover versions of Coz I Luv You on the Trojan label. 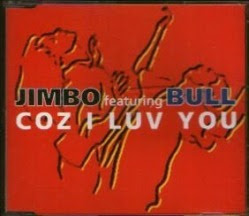 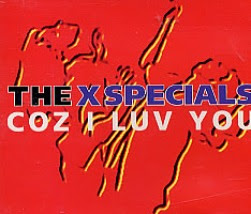 For details on these and other Jim Lea Side Ventures, visit this page of the Slade Crazee! weebly.


In 2011, The Guardian published a small article based on the single:
13th November 1971: Number 16 in our series of the 50 key events in the history of pop music


"It was all about the stomp: Coz I Luv You's bootboy rhythm anchored its swirling, menacing violin line and the two combined to give this single – Slade's first Number 1 – its frightening, primitive edge. The band went on to become the most successful UK singles act of the 70s, but their music – setting aside their Christmas pension plan – never totally lost this hint of muscle and threat. As for the look, there's still something more startling about the band's brickies-in-platform-heels image than any amount of crafted androgyny."


The song had no promotional video for the single but was performed on numerous TV shows, both English and European.

In 2006, UK artist James Blunt began performing the song at his live concerts.

Coz I Luv You
(Noddy Holder & Jim Lea)


My Life Is Natural
(Noddy Holder)